Things are bad right now and they will probably get worse in the future. Once the global pandemic caused by COVID-19 is finally under control, the afterlife of this public health crisis is likely to have a devastating impact on our national and local economies for years to come. But not everyone will be affected in the same way and to the same extent.

We have already witnessed how pandemic brings into sharp relief long-standing inequalities with respect to income and wealth distribution. Some social groups will have access to the resources (e.g. time, space, capital, influence) necessary to weather this crisis, or even make a profit from it, while many others who lack these resources will scramble to protect their lives and livelihoods. In many ways, COVID-19 intensifies and accelerates these inequalities and will ultimately push them to a breaking point – a point governments – even conservative ones – have been trying to steer clear from by introducing economic rescue plans.

Importantly, the ongoing platformization of labor and livelihoods embodies a similar (albeit less drastic) logic of intensification and acceleration. While the term ‘disruption’ has been overused and may poorly describe the economic and social impacts that platforms like Uber, Airbnb, or Deliveroo are having at a global and local level, we nevertheless think it is safe to say that many of these impacts are significant.

Platform companies are reorganizing how people work and make a living, and how citizens and their governments manage and take care of others – and they are doing so in ways that we are still coming to terms with. Emerging in the wake of the 2008 recession, they tend to exacerbate the unequal distribution of opportunities and risks (along lines of class, gender, race, and nationality) even when they claim to empower working people.

Over the past few weeks it has become clear that things are no longer ‘business as usual’ for these companies, as they are not only facing new challenges but opportunities that have arisen from the current crisis.

Meanwhile, we are seeing all kinds of new local platform-based initiatives springing up, driven by networks of citizens and public as well as private organizations aiming to assist the most vulnerable members of their communities. 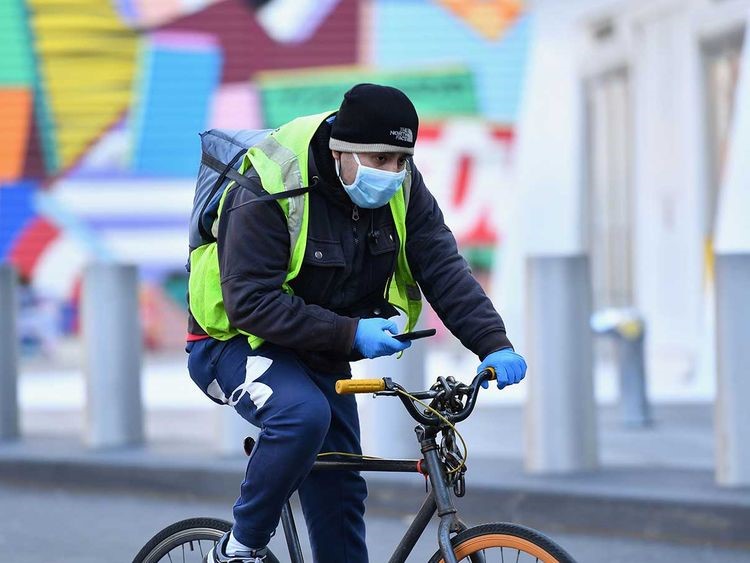 Various news outlets have reported that the demand for on-demand delivery services has grown massively in cities across the globe, especially in large metropolitan areas now dealing with increasingly severe lockdowns. In New York City, for instance, couriers for food delivery platforms like DoorDash and Caviar are facing an ambivalent situation. Whilst workers realize that their services are more needed than ever, at the same time they are worried about their health and safety because these platform companies offer no proper protections or insurances to their independent contractors. While many take pride in their job and half-jokingly praise the empty streets in Manhattan, they also feel they should not have to invest in protective gear and quite a few couriers warn that social distancing is often impossible when waiting at a restaurant with other couriers.

Although most delivery companies have by now arranged their own financial assistance programs for couriers who get infected or are required to self-quarantine, these initiatives generally offer relief up to just 14 days and require couriers to submit documentation that is difficult to obtain in times of crisis. With such high application thresholds, it is unclear how many couriers have gained access to these emergency funds, which appear to be little more than a window dressing strategy.

Beyond these limited and reactive measures, which force couriers to keep working until they are physically or legally no longer capable, companies like Uber, DoorDash, and Deliveroo continue to disavow responsibility for their workforce by fighting reclassification legislation that would oblige them to proactively provide a more comprehensive safety net. Instead, Uber’s CEO has recently petitioned the US Federal government to step in and provide the protections America’s new first responders now need more than ever. (Update: Uber’s CEO got what he wanted, which may have negative implications in the future.)

What the abovementioned companies, in tandem with Amazon, seem to be primarily focused on is expanding their delivery markets by further rolling out and diversifying their outsourced logistical services. Now that NYC’s ride-hailing industry is taking a big hit due to COVID-19, which is also wreaking havoc on the restaurant and hospitality industry, drivers and restaurant workers are turning to delivery platforms to salvage part of their income while Uber and Amazon are exploring the possibility of delivering test kits in the near future. Uber and Lyft are also trying to capitalize on an increased need for the private transportation of vulnerable people and critical goods, through their Uber, Health and LyftUp initiatives, respectively.

Meanwhile, DoorDash is partnering up with NYC’s government to deliver food to “medically fragile students”, and it has also launched a “package of commission relief and marketing support” for new and existing partner restaurants. As the company allows new restaurants to sign up for free and pay no commissions for 30 days, and as it creates priority access for restaurant workers looking to start as Dashers, it is clear that DoorDash is investing heavily in COVID-induced market growth.

Across the Atlantic, the situation in Amsterdam and Berlin looks a bit different. While delivery companies in these cities are also signing up scores of restaurants that have had to close their doors to dining customers, couriers working for Deliveroo, TakeAway, and/or Uber Eats are not (yet) seeing a similarly high boost in orders – and neither are they getting the kind of tips or bonus incentives one may expect during this crisis.

In Amsterdam couriers who have a financial buffer are staying home as much as possible, particularly students for whom the pay-outs are not worth the risk. Still, the streets continue to be dense with food delivery workers, many of whom are immigrants with little choice but to keep working regardless of how bad the circumstances get. To the extent that they had other sources of income, these have mostly been discontinued and, like their peers in NYC, they are only receiving standard emails and notifications from platform companies warning them to keep their distance and fulfil the logistical promise of contact- and friction-free delivery. That this promise is a fantasy becomes painfully clear when picking up an order at an otherwise closed McDonald’s restaurant, where more than a handful of waiting couriers converge around the door each time it opens wide enough to push through the next bag of fast food.

Another thing we are not yet seeing in European cities is the kind of crisis-driven service diversification and public-private partnerships that platform companies are currently experimenting with in the US. This might soon change, however, as Deliveroo, JustEat, and Uber are allegedly all in conversation with the British Government about providing delivery support to elderly and vulnerable people. Due to the conjunction of an increased public need for logistical solutions and a decreased demand for ride-hailing services across Europe, Uber may be looking for similar ways to reallocate its drivers in other countries.

Yet ride-hailing is not the only segment of the gig economy that is negatively impacted by COVID-19. Due to mandatory social distancing and home quarantine measures, domestic cleaners working through platforms such as Handy and Helpling are losing most of their income. Although there is much less media attention for their situation, compared to stories about Uber drivers, this does not mean it is any less severe.

In the Netherlands, for instance, Helpling bookings are down 40% and the cancellation rate is expected to rise to 50-60%. Cleaners in Amsterdam – again, mostly immigrants – are facing difficult times, as most of their clients have asked them to stay away until further notice and only a few continue to pay them. One cleaner said she lost about 1,200 euros over the last two weeks and is now fully dependent on the paycheck of her partner. When asked whether she had checked her eligibility for financial assistance, which the Dutch government recently made available to independent contractors hit by the COVID-19 crisis, she admitted having no idea such a rescue program existed, let alone if she would qualify.

This highlights the vulnerability of migrant gig workers, who often do not master the native language and have trouble accessing information pertinent to their livelihood – especially in info-saturated crisis situations like the one we are currently experiencing. Even when access is obtained, navigating the red tape in a foreign bureaucracy can be exceedingly difficult.

In sum, we see that the pandemic is impacting the gig economy in two significant ways. Firstly, it accelerates the ascendency of on-demand delivery as the dominant and most rapidly expanding service market, at the expense of ride-hailing and domestic cleaning. Secondly, it intensifies gig platforms’ hitherto tentative experimentation with public-private partnerships and forms of service provision that cater to special needs populations.

By seeking new ways to support the social reproduction of vulnerable consumer groups during a time of crisis, while continuing to discard the reproductive struggles of their workforce, platform companies are leveraging this public health crisis in a bid to become increasingly infrastructural.

That is, COVID-19 generates a state of exception that offers them a window of opportunity to test-drive their desired scenario of becoming privatized digital utilities that control and monetize critical data flows. The question remains to what extent this state of exception will become the rule.

Eva Mos is PhD candidate at the University of Amsterdam.

Jelke Bosma is a PhD candidate at the University of Amsterdam