How security and democracy at work can cure the unemployment pandemic

We’re nearing the end of the lockdown for COVID-19 in the UK, but we face a new pandemic of unemployment. The decision to end the lockdown is premature, because the UK death rate remains higher than before lockdown, and the UK currently has one of the worst relative death counts in the world. But the UK also looks to be among the worst hit by unemployment, because it has failed to ensure that people had job security and workplace democracy. I hope we’re not, but on the basis of current policies, we could be in for a resurgent virus and economic abyss.

By late May in the UK, over 2.1 million people were reported to have claimed universal credit, which probably took us over 10% unemployment (the workforce was 32.9m with 1.31m unemployed in November 2019). The UK government did have a ‘Coronavirus Job Retention Scheme’, which was meant to stop mass unemployment, as well as extend social security. The CJRS subsidises 80% of people’s wages, and it was extended to both employees and the self-employed. To take up the subsidies, employers were required to ‘furlough’ (or suspend) their workers. But many employers simply took subsidies and fired staff anyway. They did so because the government failed to attach conditions for job security and workplace democracy, as 40 labour law experts called for in March.

So it’s clear – the Coronavirus Job Retention Scheme has failed to do the one thing it’s meant to do: retain jobs.

Job numbers haven’t collapsed in other countries, like Denmark or Germany. This is because they have security and democracy at work, not just wage subsidies. By late May, unemployment in Denmark had risen to just 4.2%. Unemployment in Germany had risen to 5.8%. It might get worse, but it’s a fraction of the UK’s problem.

Unemployment isn’t natural. It’s a legal and social choice. In Germany, workers in firms with over 20 staff can elect a work council that may veto or delay dismissals and get compensation to internalise the social costs. In firms with over 2000 workers, staff can elect half the supervisory board of directors, and in firms with over 500 workers, staff elect one-third. The system was first established at the end of World War One. Following a collective agreement between unions and business, the great labour lawyer, Hugo Sinzheimer, wrote into the Weimar Constitution, article 165, that workers had a right “to cooperate in common with employers, and on an equal footing, in the regulation of salaries and working conditions, as well as in the entire field of the economic development of the forces of production”. Of course, Hitler abolished all those labour rights, along with trade unions. But the system of workplace democracy was restored after World War Two with a law that the UK and US helped draft. In the English-speaking world, we’ve largely failed to follow the same principles ourselves.

In Denmark, workers in companies with over 35 staff have the right to organise cooperation committees and workers elect up to one third of the board of directors. Each system has its strengths and weaknesses. It’s a real strength that board representation starts with small firms in Denmark, while Germany’s system of work councils is stronger. A majority of countries in the EU and OECD have some form of rights for workplace democracy. Almost all countries have job security.

The collapse in the US and UK

The unemployment pandemic is by far the worst in the US, because it has the worst labour rights in the free world. Despite a $2.2 trillion bailout, 36 million people were reported to have been fired. This probably means over 25% unemployment, a crisis worse than the Great Depression – although strangely the Bureau of Labor Statistics reported the official unemployment rate as 13.3%. The disparity in these figures – either ten million people have work or they do not – highlights the deep ambiguity and integrity in the collection of job statistics. Official rates tend to rely on sample phone surveys, and this differs from claimant counts. Most countries exclude undocumented workers or ignore prisoners. For the USA, in particular, this is a huge problem as mass incarceration raises unemployment by around 1.3% alone.

Whatever the case – between 13% or 25% unemployment – the US performance is the worst in the free world. Americans have no self-standing job security rights, except to get 60 days warning before mass layoffs. An arbitrary, incompetent or venal boss can say “you’re fired” for a good reason, a bad reason, or no reason at all. This is the ‘Donald Trump’ system of job security. It’s creating a “You’re Fired” Depression.

But the UK can’t rest on its laurels. It’s true that employers must give reasonable notice before dismissal. At no time can an employer dismiss an employee in a way that breaches the ‘duty of mutual respect’, or the contract. After two years’ work, employees can only be dismissed for a fair reason, as assessed by an Employment Tribunal, and have a right to a redundancy payment if the dismissal is for economic reasons.

Fine, but British workers have no votes at work (outside universities like Cambridge or Edinburgh), and no voice or veto over dismissals. Many employers evade employment rights by drafting sham contracts, pretending their staff are ‘self-employed’. British workers also work far longer hours and have the bare minimum of holidays in Europe (that’s 28 days or 4 weeks). This means that we have far less flexibility to adjust working times. The Coronavirus Job Retention Scheme was expected to cost £30-40 billion, and was then extended for another 3 months, so the costs may double. It’s essential that people’s incomes are protected, and the government deserve credit. But because the goal was job retention, this scheme is turning into a gigantic squander of national wealth.

The responsibility of economic theorists

It’s important to note just how wrong mainstream economics has been about job security. In the view of a dwindling minority of economic theorists, all labour rights and social security kill jobs. Without any credible evidence, it’s been said since Milton Friedman and Friedrich von Hayek were around that full employment creates uncontrollable inflation, that unions cartelise markets, and that when you put up the ‘costs’ to an employer for firing workers, then employers will not hire. Supposedly we need a ‘flexible labour market’. As Richard Layard has put it, we should be cutting labour rights to achieve “a flexible system of wage differentials. Nothing else will do the trick.”

But there’s simply no credible evidence for these claims. All the famous papers that attempt to show this conclusion are based on basic misunderstandings of the law, failings in methodology, or non-credible research. To give a central example, the OECD in its Employment Outlook has been saying that employment protection legislation hampers job creation, productivity, and investment. These conclusions owe a great deal to Stefano Scarpetta, who has spent years organising the OECD’s employment protection index. This supposedly shows the strictness of different countries’ labour rights, particularly on job security. It fails to adequately analyse trade union rights, work councils or board representation. But even on the laws it does examine, the OECD’s analysis has been based on breath-taking misunderstandings of employment law.

For instance, it’s been believed that Italy gives more job security than Germany even though Italy has no work councils that can veto dismissals. It missed that the UK regulates fixed term contract expiry as a dismissal. It suggests US enforcement of employment rights is high even though the US literally has no Employment Tribunals. Why is the OECD’s analysis wrong? It was originally compiled by asking economists and others their opinion on the strictness of a country’s laws, without bothering to examine what the law actually was. This method gave way to a set of unfounded prejudices matching those who led the compilation of the annual Employment Outlook. But these defects have not stopped literally thousands of economic academic papers relying on OECD indicators. Their conclusions regarding the effects of employment protection legislation are probably wrong, because their sources are wrong.

If the OECD does not correct its analysis, it must be exposed so that dodgy research cannot continue to produce false conclusions. Claiming rights kill jobs in this disaster is unforgivable, because the scale of human suffering is too great. By contrast the latest, credible research from the Centre for Business Research’s databases shows that job security and workplace democracy decrease unemployment, while improving productivity and innovation.

Correcting the misunderstandings is so important because the COVID-19 crisis is following exactly the same path we saw in the global financial crisis. Once again, the US is worst hit with over 25% unemployment. The UK situation is appalling, probably over 10% unemployment. Germany has seen a minimal rise in unemployment to 5.8%. The pattern was the same in the global financial crisis: between trough and peak, a 0.8% increase in Germany, a 2.8% increase in the UK, and a 5.3% increase in the US. Once the statistics are settled, we will likely see very similar patterns, driven by law. 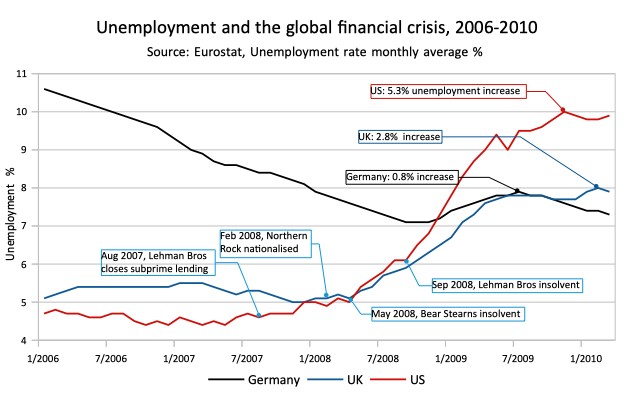 Stopping the crisis of unemployment for good

So how can we stop the unemployment pandemic? First, we must change what got us here, and boost workplace security. In the UK, the Secretary of State could take steps to amend the Advisory, Conciliation and Arbitration Service Codes that employers must follow before making dismissals. The codes can give all staff a voice on dismissals through elected work councils, if unions collectively bargain for them, or if 5 or more staff request it.

Second, we need to ensure that decision makers are accountable with workplace democracy. This means strengthening our pension laws so that staff representatives, not short-term asset managers, control shareholder votes in companies. When capital is democratised, the preferences of shareholders will be accountable to the workers who really invest, and will match the public interest in better environmental, social and governance practices. Then, to stop irrational layoff decisions being made to begin with, workers need the right to vote for who is on their board of directors, like at Oxford University, BMW or H&M. As explained above, the UK is in a minority of OECD countries without votes at work. In 1920, the Conservative Transport Minister was proposing worker directors. I have drafted a Democratic Society Act for the UK, and any US state can pass the workplace democracy and security laws they need without the federal government. States could easily start by adapting the models proposed by Senator Elizabeth Warren, Senator Bernie Sanders or Senator Tammy Baldwin.

Third, and ultimately, government has to provide everyone with a job guarantee and universal fair incomes, by filling the gaps of our social security system. This is what the Universal Declaration of Human Rights requires: universal social security and the right to work, for fair pay. From 1944 the UK government, with agreement among Conservatives, Labour and Liberals, maintained full employment for three decades post-war. If we act, we can make the pandemic of unemployment history, and become a stronger, more caring, compassionate society again.

Dr Ewan McGaughey (@ewanmcg) is a senior lecturer in law at King’s College, London, and a research associate at the Centre for Business Research, University of Cambridge. He is the author of A Casebook on Labour Law (Hart 2019).