Public Attitudes to Work: An Extract from ‘The New Working Class’ by Claire Ainsley

Claire Ainsley was the Executive Director of the Joseph Rowntree Foundation until April 2020, when she became newly-elected Labour Leader Sir Keir Starmer’s Head of Policy. As the Labour Party develops a new policy agenda ‘under new management’ and the COVID-19 pandemic continues to create uncertainty for millions of workers, we reproduce here an excerpt from her 2018 book, The New Working Class.

There is an increase in perceived job quality and satisfaction among all groups, including the new working class. More people say they have what counts as a ‘good job’ these days, involving characteristics such as the work being interesting and having good opportunities for advancement. Sixty-two per cent of those who are occupationally working class say their job has four or more positive attributes compared to 42 per cent in 1989 (this compares to an increase from 72 to 77 per cent for the highest social class). Overall the proportion of workers in the economy with a ‘good job’ has increased, and the gap between the social classes of those with a ‘good job’ has reduced. However, those on lower incomes are significantly less satisfied with their jobs than those on higher incomes and those in routine or semi-routine occupations were much more likely than those in professional or managerial occupations to say that a job is solely about the money earned. 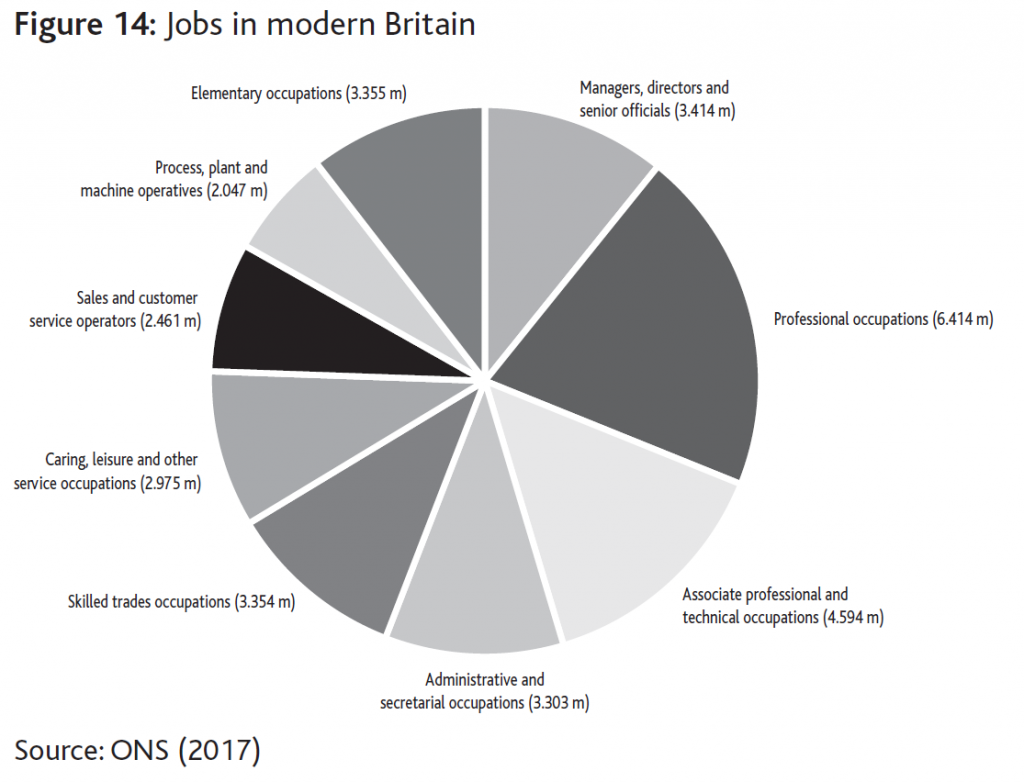 ‘If we were actually paid when we were off sick that would be such a huge weight off my shoulders. I panic if I can tell I’ve got even a cold coming on because I cannot afford not to work.’ (Voter, Eastleigh)

Although work appears to offer more positive attributes to the new working class today than it used to, there has been a significant drop in perceived job security in a relatively short space of time. In 2005, 71 per cent of people in semi-routine and routine jobs said they had job security, which fell to 60 per cent in 2015. Job security has increased since 2005 for professional and managerial workers (65 per cent in 2005 to 67 per cent in 2015); however, given that the public debate about job security has focused mainly on the lower end of the labour market, it is interesting to note that there is not that much difference between professional and managerial workers who say they have job security, and routine and semi-routine workers.

All social classes are more stressed at work than they were, with professional and managerial workers and those aged 35-44 most likely to feel stressed. However, those in semi-routine and routine jobs saw the greatest increase in constant stress between 2005 (1 per cent) and 2015 (10 per cent). 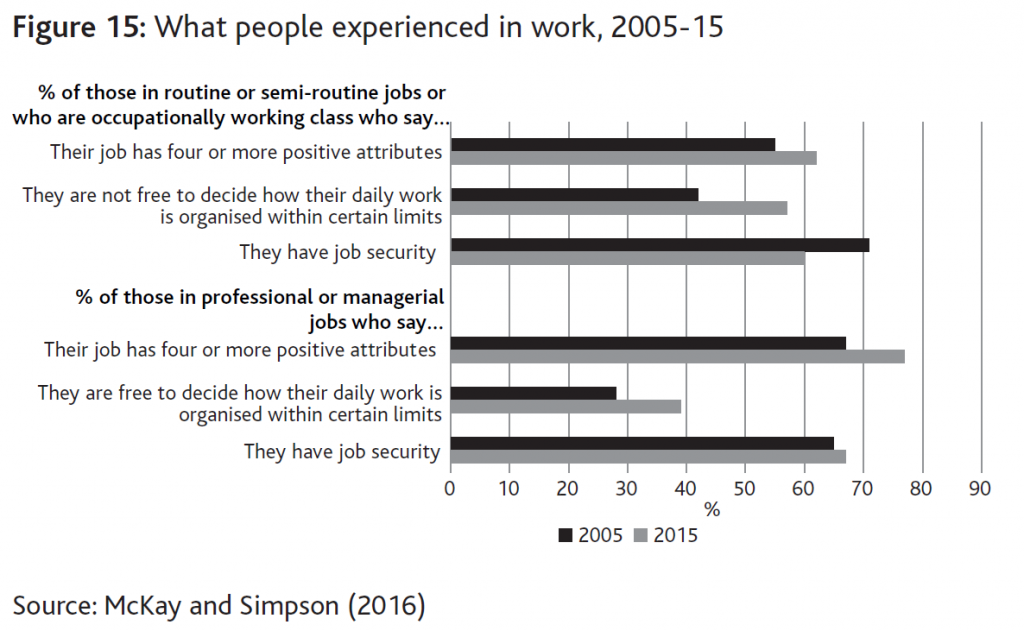 Although these proportions have fallen over time, they could also be reflective of the relatively high employment rates enjoyed in the UK since unemployment peaked in the mid-1980s at more
than 3 million and reached nearly that level in the early 1990s. Most people agree that most people who are unemployed could find a job if they tried hard enough, and just 16 per cent support more government spending on unemployment benefits. Overall, expectations of government have not declined much in other areas of public policy in the past 20 years, such as providing housing, keeping prices under control and providing industry with the help it needs to grow,49 suggesting that responses are shaped by the view that people can get a job if they want one, rather than any overall view that the state should retreat.

High employment and abolishing extreme poverty pay are significant achievements of the last 20 years. The issues the new working class face in relation to work are serious, however: long-term low pay that leaves them unable to save for the future, insecurity, a lack of opportunity to progress, and much of their prospects in the labour market related to geographical location or individual characteristics of being female, from a non-White minority ethnic group, with caring responsibilities, or with a disability or health condition. And this is before the full effects of automation impact on jobs at all levels, in industries from retail to hospitality.

Theoretically there is a chance that the supply of low-wage labour is set to fall due to a dip in immigration, thereby increasing the price of currently cheap labour, but even if this were to occur, it could result in the loss of low-wage jobs without the prospects of an alternative. In addition, it would go against the last 40 years’ form for an economic gear change to benefit the least well-off. One of the major risks for the new working class is not just their vulnerability to automation, but how ill equipped they are compared to higher skilled workers to adapt or change jobs. Of course, automation is not just the only driver of industrial change: companies failing, re-locating or restructuring happens all the time. But one of the characteristics that members of the new working class share is their likelihood of not holding a university degree, and it is the increased skills and qualifications that come with higher education that equip many workers to change jobs or careers, and therefore so disadvantages non-graduates. Too many people in the new working class are trapped by receiving an education that did not equip them well enough in the first place into jobs that do not pay enough to make ends meet, and are stuck there due to lack of opportunity and skills to move on.

From the perspective of the new working class, the priorities for policies about work are ones that promote jobs with security, a decent wage, the opportunity to advance, and that are interesting. Employers in the private and public sectors are primarily responsible for those things, but government has an important role to play where the labour market does not fulfil citizens’ expectations. At the same time, government needs to not be so interventionist in its directions that it creates a negative environment for job creation, and ends up deterring companies, whether home-grown or from overseas, from investing in jobs in Britain. Job security is fast emerging as the big priority for working people, and a party that can demonstrate it is committed to improving security in the modern economy is likely to be closely listened to by voters.

‘Getting paid for travel time doesn’t feel like a bonus or a perk from our employer, it feels like a basic human right. But nine times out of ten in care it doesn’t happen. So that’s definitely the one I’d pick.’ (Voter, Grimsby)

Policy 1. Create an employment rights floor to safeguard all workers from practices that unfairly decrease their job security, such as guaranteeing sick pay regardless of employment status and stamping out non-payment of waiting time. Flexible working practices can benefit both worker and employer, but over time it has become too easy for employers to evade basic employment rights, creating insecurity for the individual and unfair competition with better employers. Employers should be incentivised to adopt working practices that create security, not rewarded for a race to the bottom on employment conditions. While the focus for public debate has been on the increased use of zero-hours contracts that do not provide a guarantee of hours, blanket bans or guaranteed hours after a fixed period are likely to create unforeseen consequences (like workers being discharged just before the flexible period). A package on security at work would be better placed being targeted at clamping down on extreme practices such as routinely giving workers daily notice for work that has been practised in the US, before they take hold in the UK. A charter on day one of a worker’s employment rights, whether contracted or directly, was one suggestion by the Taylor review of modern working practices that could underpin a new job security package.

As well as the new working class being much less likely to have a university degree, workers who missed going to university first time around are also less likely to have had access to training, further education or skills development. The recent Taylor review highlighted the problem: over half of those in the lowest socioeconomic category have not participated in any training since they left education. Given the pace of technological and global change, as well as the rising working age as people live longer, many middle-aged workers are being left further and further behind.

‘Companies used to have a responsibility to train and educate a local workforce. That isn’t the case these days because they can go abroad to find the skills.’ (Voter, Clacton-on-Sea)

Policy 2. Inspire a learning revolution for adult workers, in adult education and at work, with a new alliance between employers and government. Meet all basic skills needs including digital skills by 2030.52 Establish a high-level quality standard for apprenticeships, an employer-run institute, better routes into higher skilled tech apprenticeships and ban low-quality apprenticeships. Introduce a second chance career fund to help older workers retrain.54 Costs for training for low-paid workers in sectors such as social care should be written off, especially in Scotland, which is still paying higher education fees for middle-class students.

One of the unforeseen consequences of the opening up of access to higher education, at the same time as the proportion of semi-skilled jobs declined, has been the decrease in status of non-graduate professions. Professions that used to be considered part of the working class, like nursing, have become graduate occupations. While those moves have increased the standing of many professions as well as the standards they work to, social, cultural and economic disparities have been created between those who hold a degree and those who don’t. Of course it is possible to have a university degree and still be, or perceive yourself to be, working class, but a university degree is generally a signifier of upward mobility, and the fact that many young people are going to higher education should not mean that those who don’t face such a dismal pool of options and prospects for decent living standards in adulthood. Higher education is in need of reform, as argued in Chapter 4, but that aside, the status of nongraduate occupations needs to be improved so that it gives people respect and dignity at work, whatever their level of attainment. Within this, the lack of availability of good quality part-time jobs reinforces the pay differential between groups, in particular for people with disabilities and those with health conditions, and those who have caring responsibilities. The relative disadvantage by non-White minority ethnic groups, women and people with disabilities needs to be tackled, and by focusing on improving prospects and progression into higher paid jobs by sector and profession as well as by characteristic, efforts are more likely to have a tangible impact.

Policy 3. Government should lead the way on a campaign for good work, with a particular focus on non-graduate and parttime jobs. While employers will lead good practice, politicians can provide strategic national and local leadership towards employment that provides opportunity, security, training, employee benefits, flexibility and progression. ‘Good Work’ standard could be developed with support from government, employers in the private, public and voluntary sectors, and with the trade unions. Government can ensure the technological infrastructure is in place to enable flexible, part-time working as well as practically incentivising employers through the tax system. Priority sectors should be retail, care and hospitality, which is where low-paid jobs are concentrated. Clear targets should be set for decreasing the gap in employment for particular minority ethnic groups and those who are disabled, and employment support devolved so employers can work locally to strengthen opportunities. Many people with disabilities can and want to work, but struggle to find employers willing to offer them the kind of flexible working that will work with their conditions. Increasing the availability of good-quality part-time and flexible jobs could bring many people with disabilities and those with caring responsibilities into employment.